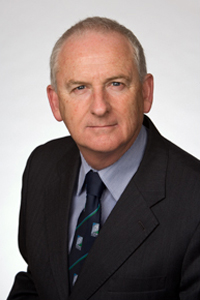 Grahame John Berecry was born on 18 August 1947 and grew up in the North Sydney area. He completed his schooling at Marist Brothers Mosman and received his Leaving Certificate in 1964. Following the path of many before him, Grahame embarked upon a career in the public service, joining what was then the Petty Sessions branch of the Department of the Attorney-General in 1965. The challenging and varied work of the clerks in the Petty Sessions courts was considered a valuable training ground and Petty Sessions clerks were eagerly sought after by other areas of the Department.

Like many others, including a number of my colleagues in the then Family Law Division of the Supreme Court (which I had joined in April 1974), Grahame transferred out of Petty Sessions, joining the Supreme Court (in Grahame’s case, the Common Law Division) in 1969 starting off as a counter clerk, then progressing to Deputy Secretary of the Solicitors and Barristers Admission Boards and finally Chief Clerk of the Common Law Division in the mid 70s. So highly was Grahame regarded by those in authority in the Common Law Division that his position as Chief Clerk was considerably upgraded in 1980 to ensure that Grahame stayed in the court. Grahame ultimately completed the Barristers Admission Board examinations and was admitted as a non-practising (a status that does not exist today) barrister in late 1981. Not surprisingly, Grahame was quickly appointed a Deputy Registrar of the Supreme Court in 1982 and soon rose through the ranks to become Registrar of the Court of Appeal in 1984, Senior Taxing Officer in 1986 and finally Registrar in Equity in 1988.

The position of Taxing Officer was appropriately named as it was tedious and demanding work that few embraced with any joy or relish. When Grahame was put in charge of Taxing in 1986 there were entrenched delays of up to 18 months in taxing bills of costs, delays that Grahame was determined to eliminate. Grahame’s focus, energy and efficiency in attacking those delays was remarkable, so much so that by mid-1987 the delays had been completely eliminated.

Many in the profession would remember Grahame best from his time as Registrar in Equity from 1988 to July 2005. Courteous, firm, efficient and always impartial Grahame was always held in the highest regard by those who appeared in his lists.

Perhaps Grahame’s greatest legacy to the Court system was not his conduct of court lists but in the area of mediation. The Family Provision Act 1982, which commenced operation in 1983 and when compared to its predecessor the Testator’s Family Maintenance Act 1916 considerably expanded the scope for persons who could make application for provision and the estate from which provision could be made, led to a considerable increase in proceedings for provision. Concerned about the legal costs imposed upon estates, drain upon court resources and delays in the administration of deceased estates and aware that family provision proceedings were essentially issues about money, Grahame began conducting court mediations in 1996. Popular with the legal profession because of his easy going nature, insight and objectivity, it was no surprise that he was inundated with work. Such was the demand for mediations that in 1999 Jonathan Finlay as Registrar in Probate and myself as Senior Deputy Registrar in Probate were given mediation training and appointed as Court Appointed Mediators. The arrangement was that Grahame did mediations on Monday and Tuesday afternoons and Wednesday mornings (Grahame liked to keep the Wednesday to Friday afternoons open for special fixtures) while Jon Finlay did Wednesday afternoons and I did all-day mediations on Thursdays. As a measure of Grahame’s efficiency, it is worth reflecting that as Registrar in Equity he did both the general and corporations lists in the morning, all the special fixtures that arose from those lists that were within a registrar’s power to deal with plus three mediations per week. So successful was the mediation system that Grahame implemented that compulsory mediation is now enshrined in section 98 of the Succession Act 2006 – few, if any, court officials can claim such a legacy. It is also measure of the success of his mediation initiative that the court now has an officer who conducts mediations full time and he and his fellow deputy registrars now conduct up to 20 mediations per week.

Not only did Grahame spend over 17 years as Registrar in Equity, he also spent periods as an acting associate judge when one of the associate judges in Equity was on leave or acting as a judge, a role he performed with distinction. It is a matter of some regret that he was not appointed an associate judge on a permanent basis.

Grahame left the court in July 2005 and, encouraged by no lesser luminaries than Sir Laurence Street QC and Malcolm Broun QC, joined Edmund Barton Chambers. Concerned that he may not attract much mediation work he initially intended to do general advocacy work but it seems that he may have done little more than one advice on evidence, so in demand was he as a mediator. Demand for his services came as no surprise – his easy rapport with practitioners together with his calmness, impartiality, insight, straightforwardness and objectivity were always welcomed by the profession.

Away from his professional life Grahame was a very keen North Sydney Bears supporter and even in North Sydney’s darkest days was always on the hill at North Sydney Oval for the Bears’ home games. Three of his uncles played for North Sydney in the 1911-1927 period including Tom Berecry who played 2 games for New South Wales and toured with the 1911-12 Australasian Kangaroos, playing in the third test against England. After North Sydney was excluded from the NRL in 2000 he worked extensively with Greg Florimo in trying to bring the Central Coast Bears into to the competition, unfortunately to no avail. Grahame’s light-hearted ribbing of rugby union supporters and his opinion of rugby union in general was always entertaining and amusing. He was also a very keen swimmer, sailor and collector of fine wines.

Grahame was not without his quirks. Despite his prodigious talent in performing his professional duties as a registrar of the Supreme Court, the same could not be said about his dress sense. To say that he was contemptuous of fashion would be the greatest of understatements. In particular, he was notorious for wearing appalling ties that rarely matched whatever he was wearing, a habit that created considerable amusement among court staff who would always check out how bad the latest tie was. On one occasion Gerry Whalan, the Prothonotary at the time, berated Grahame for the tie he was wearing. Completely unconcerned and not in the least bit apologetic, Grahame, who was acting as Registrar of the Court of Appeal at the time, replied facetiously “Well, Frank Hutley doesn’t mind it!”. Hutley JA was the acting President of the Court of Appeal at the time.

Sadly, Grahame was suddenly diagnosed with inoperable and aggressive brain cancer in late August 2018, dying on 30 January 2019. He is survived by his wife Beatrix, his sons Robert, David and Paul, grandchildren Arkie, Leroy and Jack and his former wife Llynne.

I knew Grahame from when the various divisions of the Supreme Court (except Protective) were moved together into the Law Courts Building in February 1977. There are many good things that could be said about Grahame but as a friend and former workmate I’ll keep it short – “a wonderful colleague and an even better bloke”. I doubt that the Supreme Court will ever see the like of him again.