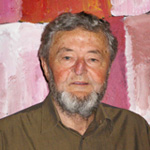 “The Ken Hinds collection is one of Australia’s most individual and extensive collections of art and other objects. Its more than 30,000 items include a vast collection of toys, books, ancient artifacts from around the globe, and more than 3,000 Australian works of art.”

The late Ken Hinds started collecting Aboriginal Art in the late 80s. Around 1999 Ken travelled to Alice Springs and for the first time he was able to spend time with the artists whose works he was collecting. Ken travelled the vast tracts of the Western Desert, experiencing at first hand the countries of, and stories behind, the paintings which later came to grace his walls. This personal contact and love of their works moved Ken’s collection into a whole new dimension as he acquired copious numbers of canvases, often of large and impressive scale.” Susan McCulloch, Author The Encyclopedia of Australia Art.

Housed in a two-storey private gallery in the Sunshine Coast Hinterland, the Ken Hinds Indigenous Art Collection is recognised as one of the most stunning collections in Australia.

A retired engineer, Ken Hinds spent decades working on multi-million dollar construction projects while nurturing a passion for collecting artworks and contributing to the community. A director of the Sydney Cross City Tunnel (West End) and the Sydney Airport A380 Aircraft Infrastructure project, Ken was  a distinguished Grade 1 Arbitrator, Accredited Mediator, Adjudicator, Court Appointed Referee and Expert Determiner. In 1995 he received two engineering excellence awards for his involvement with the Sydney Airport Parallel Runway Project; a Centenary Medal for Services to Engineering, Construction and the Arts in 2003 and Community Australia Day Award in 2007. Ken passed away on 3 September 2018, aged 74.