Negotiated settlement reflected in the celebrations for Kenya’s Jamhuri Day 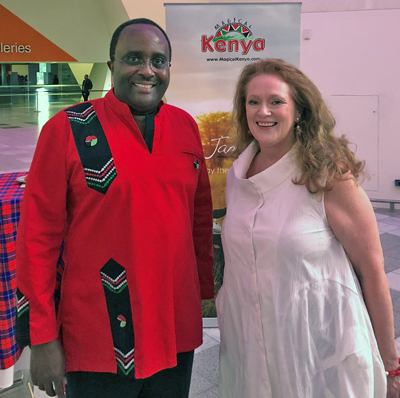 His Excellency, High Commissioner of Kenya, Isaiya Kabira with Deborah Lockhart at the 55th Anniversary of Jamhuri Day in Canberra.

Jamhuri Day marks the independence and birth of Kenya as an independent nation-state. On the 12 December 1963, Kenya achieved sovereignty with its own government led by Jomo Kenyatta as Prime Minister. A year later, on this day, Kenya officially declared itself a republic.

The modern history of Kenya is intertwined with British colonialism. First formed as a colony in 1920, Kenyans fought for the British as ‘askaris’, shared their farming land and facilitated British settlement, whether willingly or not. In this context, non-violent revolution against Imperial Britain is simply unrealistic. The Mau Mau movement saw revolutionaries killing British settlers, to which the British responded with their own force to suppress the insurgency. Under this intense pressure, tensions reached all-time highs and a solution needed to be reached quickly. It was in this contentious political arena that the crucial role of negotiation is underscored. The end goal was durable peace for its civil society through encouraging discussion, a willingness to compromise and collaborative decision making.

For Kenya, it was the acknowledgment by both sides of the conflict that they needed to reach a negotiated settlement that is reflected in the celebrations of Jamhuri Day. This of course does not understate the fact that independence for Kenya was the culmination of decades of struggle. But it does show the power of change when parties adopt a conciliatory stance. Jomo Kenyatta’s ‘forgive and forget’ attitude and his willingness to compromise over the economy, in return for British support for Kenya, accorded with Britain’s own realisation and policy change to move away from colonialism.

The seminal Lancaster House Conferences held in London with Kenyan delegates acted as the essential vehicles for settlement schemes and the development of Kenya’s Constitution, giving each party a voice to be heard. Negotiation throughout was essential, both in the lead up to and during the transitional period to make Kenya what it is today.

* Tony Song is an intern at ADC and is currently studying International Studies/Law at UNSW. Having seen the internal cogs of the NSW Courts system as a Court Monitor, he is now exploring the other side of the coin in advocating for alternative dispute resolution.