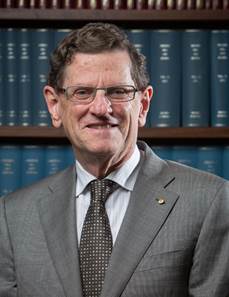 The Honourable Robert French ACPatron
Robert Shenton French AC served as the twelfth Chief Justice of Australia from 2008 to 2017. Mr French was born in Perth, Western Australia and was admitted as a barrister and solicitor in 1972. He was appointed to the Federal Court in 1986, serving as a justice on that court until his elevation to the High Court on 1 September 2008. In July 2008, Prime Minister Kevin Rudd named Mr French as Chief Justice, becoming the first Chief Justice from Western Australia.

Mr French has held a long standing interest in ADR processes. As a Judge of the Federal Court Justice French was passionate about the use of court-annexed mediation as a way of encouraging more, and earlier settlements or at least narrowing the issues in dispute. He was also interested in the use of serving judges as mediators in Court Proceedings on the basis that a mediating judge would not have anything to do with hearing the case if mediation did not effect a settlement. It was these key areas of interest that drew him to his patronage of the Australia Disputes Centre in late 2017. Since that time, Mr French has been keenly involved in the important work of the ADC in advancing the uptake and best-practice of ADR.